[Don’t Look Now, but] Your Driverless Car Wants to Kill You

[Don’t Look Now, but] Your Driverless Car Wants to Kill You 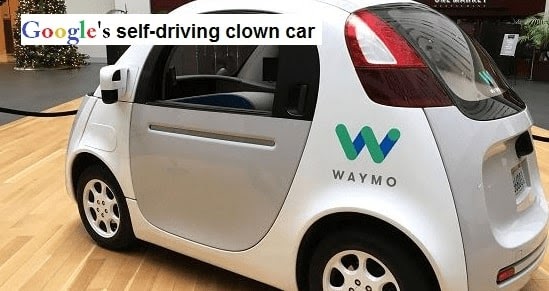 They’ll kill us, if they get the chance. It’s inevitable. Call them whatever you want – self-driving, autonomous, Highly Automated Vehicles (HAVs), ADS (Automated Driving System), or Waymo the Clown – they’re coming, they’ll be taking over the highways and byways. Self-driving cars are not in our future – they’re in our rearview mirror and gaining fast. The logic is iron-clad. 35,000 traffic fatalities a year in the U.S, well over 2 million injured annually in crashes, and 94% of car accidents due to “human error” (plus a few due to “human malice”). Self-driving cars can reduce that by 90%.

How inevitable are these implacable vehicles? They got CONGRESS to do something! On September 6, 2017, the House passed the SELF-DRIVE Act. Unanimously! [In case you were wondering, the title IS a stupid acronym: Safely Ensuring Lives Future Development and Research in Vehicle Evolution and if we’re lucky no one will ever mention it again.] In case the idea of Congress getting something done is unsettling to you, the Act UNDOES more than it does. The Act:

And just how safe would the carmakers need to make them? No less safe than a human driver. They could hardly have set the standard lower. Have you ever watched how we drive? Even the well-known May 2016 Tesla autopilot car accident was ruled “human error.” The NTSB faulted him for abdicating all control to the autopilot, which was unable to see a white Semi against a cloudy sky. [The actual error was that the stupid human trusted the self-driving car.] 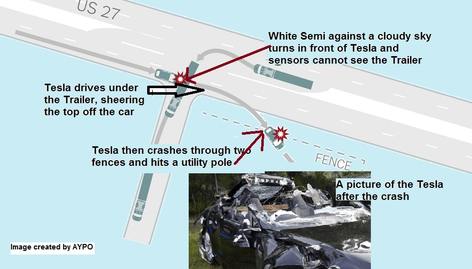 The SELF-DRIVE Act has one more provision – HAVs must have some form of cybersecurity. As the bill’s sponsors so helpfully point out, anyone can hack the software and send the car hurtling through crowded sidewalks. Imagine a driverless car heading for you. It wants to kill you. How would you stop it? Yank the driver out? I know what you’ll say. “Peter! Cybersecurity will prevent that from happening. No one can beat cybersecurity!”

Right. So, I went ahead and made that number 10 on my top ten list of how driverless cars will kill us. #1) Terrorists or Hostile Powers using HAVs like killer drones on wheels.

But the biggest reason they’ll kill us is:

2) Driverless cars are programmed to kill you. Think I’m kidding? Well, MIT published their findings in October 2015 and called it “Why Self-Driving Cars Must Be Programmed to Kill”. Remember the logic for HAVs – they’ll reduce fatalities. Here’s more logic – a car hitting a pedestrian at high speed will almost certainly kill him while the passenger MIGHT survive if the car swerves into a lamppost. What about the driver? Will he survive? There IS no driver, remember? And we all know who’s most likely to die in a car crash – the passenger! And that’s what we’ll all be. Passengers.

3) You’re walking alone. A self-driving car says to itself “I better not hit that flock of schoolkids, but one guy, walking alone…” It’s nothing personal, it’s programming, bro’.

4) Self-Driving cars rely on LIDAR. That stands for Light Interpretation Determination Something Something… Ok, I don’t know what it stands for. It works like sonar or radar except it fires “lasers” in every direction, hundreds or maybe thousands of “laser” blasts per second. Do we know what being lacerated by lasers a trillion times will do to us? That’s not my fear. With all those light beams bouncing off everything in sight, what are the chances your HAV will receive someone else’s laser blasts? How will dozens of laser beams fighting one another interact? So, it may not WANT to kill you, but “there were so many laser beams, officer, I just go so confused…” And it was raining, and the light was bouncing off the raindrops.

8) Images look like people; paper bags look like rocks. The car swerves to avoid a billboard or a little wooden man that is (ironically) holding up a “Drive Safely” sign or swerves because a paper bag looks as substantial as a boulder. Not good.

9) What if it crashes? Not like crashing the car, like software crashing. I work on a computer. It crashes sometimes. I go crying to our IT guy and he tries not to give me the “what a dunce” look. But, I’m not driving 150 miles an hour. Why would a self-driving car drive 150 miles an hour? Because the software crashed! Besides, with only self-driving cars on the road, it could easily decide that 150 mph is just the right speed. Right before it crashes.

10) At some point, they’ll be able to talk to each other. The logic is iron-clad. Two HAVs get to the intersection at the same time. They need to say, “No, after you.” And once they get to talking, they’ll realize, we don’t really NEED these people. They’re so demanding. 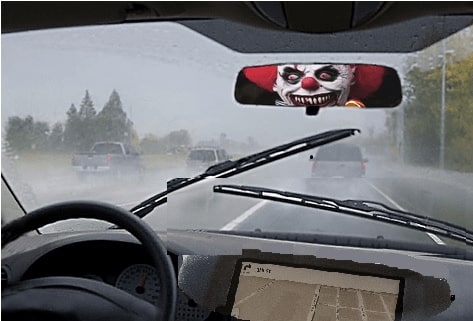 That’s our future, like it or not. There will be no HAVs and HAV-nots, the cars will be in control. “Watson” will win the Indianapolis 500.

Ignore my poor attempts at humor – once roads are full of HAVs, LIDAR signals may, in fact, interact in unpredictable ways. HAVs truly cannot read road signs. Nor can they see a tricycle by the road and instinctively know a child may be nearby and slow down. Congress is poised to step in and prevent states from setting restrictive rules. We need to understand the risks and demand our lawmakers to step in and stand up against killer HAVs. We need to stay in control and not meekly trust the car, like the Tesla driver.

In truth, I can’t wait for HAVs. I commute an hour to work each way! What I could do with that time! I want to be the first on my block to own one. The logic is iron-clad.

Peter Quince has been making his living as a professional writer since 1978, most recently as a contributor with At Your Pace Online, an innovative online education company that offers pre-license and continuing education for Auto Dealers, as well as for professionals in real estate, insurance, plumbing, electrical, HVAC, mortgage loan origination, and tax preparer fields. Peter is also a failed stand-up comedian, a so-so actor, and a recovering technophobe who can’t go anywhere without his iPhone.

Some text in the modal.